How often does a monumental moment in your life occur, and then you suddenly realize that 30 years have passed since that moment?

When I first joined the service the Soviet Union and the Warsaw Pact were our main threats. I served as an Infantryman in West Germany from 81-83 and our mission, 100% of the time was to be prepared to stop the Soviets WHEN (not IF) they charged through the Fulda Gap.

In 1986 I took the German course at the DOD Foreign Language School. It would have been nice to study German to be a tourist and learn how to order yet one more beer. But the focus of our course was to learn German in order to stop that Soviet Threat.

For the next four years I worked alongside US military Russian, Polish, Czech and German linguists in tactical and aviation collection units conducting missions on the threat. For those of us serving in Germany at that time the border was a well-known neighbor. We knew every inch of it from north to south and were ready to destroy anyone who dared cross it. We knew the West German countryside as well as we knew our homes back in the states and were willing to fight and die for our comrades, the people of West Germany. Many Soldiers there were like me, with our families living there with us. We knew that it was a risk, but it was a risk we felt worth taking.

We never expected the German mission to end. We thought that the Wall would stand for a hundred years. Seemingly overnight it started to crack, and once that first crack appeared, it spread like a lightning bolt, dashing across East Germany and destroying it forever.

We watched on TV, in amazement, as people danced on the Wall and tore it apart with a vengeance. I was on a mission, on the border not long after and a family of Easties strolled across our section of the border on their way shopping, to a place that they’ve live all their lives within just a few miles of, but had never been to.

Our Cold War mission was remarkable. We stood up to an overwhelming foe and they collapsed. We were determined and resolute. I am proud of my Cold War time, and the men and women that I served with. We made a difference. It is difficult to believe that it has been 30 years since we Reunified a broken nation and prevented a world war.

I have faith in the new generation of our military serving in hot spots all over the world. We owe them a debt of honor, respect, and gratitude as they place themselves in harms way for the sake of peace. We must support them at all costs while they serve and when they return home to begin new lives as Veterans. This is my pledge, we will repay the debt that we owe our Vets. 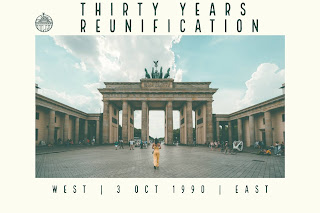 The gears and springs of our world are wound TIGHT. You can almost feel the tremble and strain in the air when you leave home or wa...